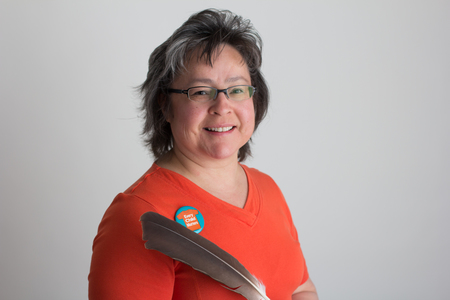 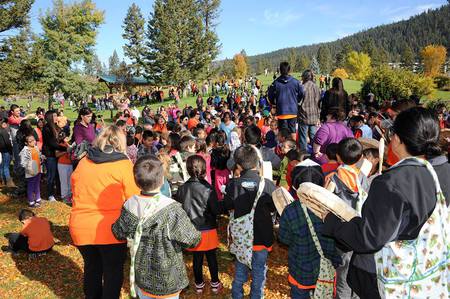 A legacy of the St. Joseph Mission (SJM) Residential School and Phyllis' story of having her shiny new orange shirt taken away on her first day of school at the Mission.  The date was chosen because it is the time of year in which children were taken from their homes to Residential Schools, and because it is an opportunity to set the stage for anti-racism and anti-bullying policies for the coming school year.  It also gives teachers time to plan events that will include children, as we want to ensure that we are passing the story and learning on to the next generations. It has grown into a movement and an opportunity to keep the discussion on all aspects of Residential Schools happening annually.

The Orange Shirt that Inspired a Movement

“Usually every year in the second week of August I think - it’s starting now, It’s that time of the year.”  For Indigenous families, the very idea of “back to school” can be emotionally difficult. Phyllis (Jack) Webstad from the Stswecem’c (Canoe Creek)/ Xgat’tem (Dog Creek) First Nation remembers all too well. “A lot of people get emotional, with the change in the weather, with that coolness. The cool weather means they are coming.  Kids are getting taken away, things are going to be changing.”

September 1973, when Phyllis was only 6 years old, and she was living with her Granny on the Dog Creek Reserve. Her Granny had managed to save enough money to buy her a new outfit for school. Phyllis remembers her shiny orange shirt, with a string lacing it up the front, and her shiny 6-yr old self who felt so excited to be going off to school.

This excitement, her orange shirt, and the rest of her clothes were stripped from her when she got to the Mission. She says: “I didn’t understand why they wouldn’t give it back to me, it was mine! The color orange has always reminded me of that and how my feelings didn’t matter, how no one cared and how I felt like I was worth nothing. All of us little children were crying and no one cared.”

Says Phyllis: “I didn’t just roll out of bed one day and have Orange Shirt Day happen.” A series of events and different people set it all in motion.

In was May 2013 when Phyllis first told her truth about residential school. She was now living in Williams Lake, and there was a Truth and Reconciliation (TRC) event being planned. Fifteen bands in the Williams Lake, Quesnel area went to the Saint Joseph’s Mission school. Former Chief Fred Robbins from Esket, wanted to have monuments for survivors, and out of this came the TRC event. Phyllis adds: “A person from Alkali had started a St. Joseph’s Mission (SJM) online reunion group beforehand, a group of us met and though why don’t we tack on a weekend reunion to the TRC event?”

The Reunion group asked Phyllis to go to the planning for the week-long TRC event as spokesperson for the reunion group which led to her speaking at the media event to promote the TRC week and Reunion plans.

“I can never say this part without choking up,” says Phyllis, “I met a friend the night before and told her I don’t know what I am going to talk about. What can I say?  I told her I would tell my story about the orange shirt my granny bought for me and how my grandmother attended for 10 years and how all of her children attended as well. So that’s how I told my story for the first time.”

Phyllis’s friend, Joan Sorley, a local politician, attended this media event and was inspired by hearing Phyllis’s experience and about telling her orange shirt story for the first time.  Joan remembered Justice Sinclair challenging people to not let the conversation stop so she suggested the creation of Orange Shirt Day and make it an annual event in the Cariboo/Chilcotin. Joan contacted Jerome Beauchamp at School District #27 and Annie Burrill, who then worked for the City of Williams Lake. Joan asked them if they would support the idea, which they did. Says Phyllis: “She asked me and I said that sounds OK, we can do that.”

After much discussion we decided on September 30th so that kids can learn about it and teachers have time to plan. Plus it was the time of year when kids were taken away from their homes.

The idea spread on social media through Shannon Bell. She distributed flyers during the Truth and Reconciliation event in Vancouver in early September, urging people to wear orange on September 30th. National Chief Shawn Atleo attended the first Orange Shirt Day in Williams Lake on September 30, 2013. As the idea took off and the movement grew, Phyllis realized she couldn’t even keep track of all the events people planned. Googling Orange Shirt Day images brings a sea of orange!

“Seeing elementary school kids in Orange shirts, realizing they are learning the history of the First People of Canada and my grandchildren will grow up knowing, that was a real big moment for me last year. I had a good cry about that. I’m just glad that non-native people are learning so they can have a different attitude and behaviour. It will make my grandchildren’s future different in a good way, it will make a difference for all First Nations kids in that they will live in a different society that I did.”