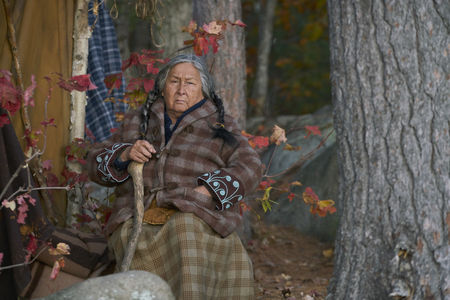 Edna Manitowabi, Anishnaabekwe, is Bear Clan, a Grandmother, and Great-Grandmother, of Ojibway/Odawa ancestry originally from Wikwemikong, Manitoulin Island. A fifth degree Midewewin teacher and seeker of Indigenous knowledge, Edna is one of the founders and teachers of Minwaywaygaan Midewewiwin Lodge, Rosseau River, Manitoba. Her role within the Lodge includes translation/interpretation of stories, direction, teachings, and songs  - Ojibway to English.

Though recently retired, as Professor Emeritus, Edna Manitowabi, maintains her connections to the Indigenous Studies Department at Trent University. Here over the years, she has developed and taught courses in Tradition and Culture, Aboriginal Knowledge, Indigenous Theatre, Aboriginal Women, and has been instrumental in the development of, as well as teaching, components of this university’s PhD program in Indigenous Knowledge.

While at Trent University, Edna was the driving force behind the creation of Nozhem Theatre, Trent University’s dedicated  Aboriginal Performance space, and The Indigenous Studies Departments biennial Native Women’s Symposium.

Always a strong and appreciative supporter of Aboriginal Arts over the years she has also served as the Traditional Cultural Director for The Native Theatre School, The Centre  for Indigenous Theatre, the Banff Aboriginal Dance Program  and acted/performed  in several theatrical productions beginning in 1994 with her first role in Drew Hayden Taylor’s play Someday,  in which she was able to incorporate her experience as a Residential School Survivor.

For the past fifty years Edna has been a strong advocate for Aboriginal Women and at the forefront of the revitalization of Aboriginal Traditions, Ceremonies and Spirituality, in Ontario and Manitowabi. During the last 20 years this work has grown to include the study of Anishnaabe traditional medicine plants their preparation and uses. Working with her close friend Kathy Bird, Peguis First Nation, these two Anishnaabekwe grandmothers have established medicine lodges: Aki Mashkiki Nandewewewin in many First Nations communities across Ontario and Manitoba wherein they shared this traditional medicine knowledge.