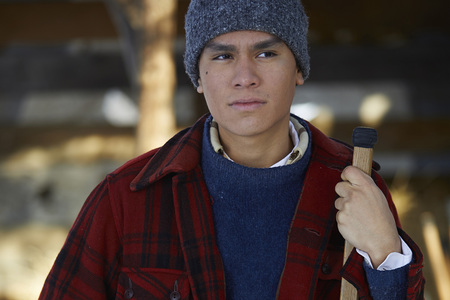 While The Revenant marked his burst onto the scene, Goodluck has since starred in two other independent films.  In 2016, Forrest starred in Indian Horse which was directed by Stephen S. Campanelli.  The film follows Saul, a great native hockey player who overcomes racism in the 1970's.  He then starred in The Miseducation Of Cameron Post directed by Desiree Akhavan.  The film follows a young girl (Chloe Mortez) who is forced into a gay conversion therapy center.  In addition to his film work, Forrest also starred in two television pilots, Citizen for Hulu and Scalped for WGN.

Prolific behind the camera as well, Goodluck is an award-winning youth filmmaker whose work has premiered at the Seattle International Film Festival, Taos Shortz Film Festival, LA Skins Festival, and had made him the Smithsonian's National Museum of the American Indian and SWAIA Santa Fe Indian Market Class X Youth Winner.  Goodluck’s film work also led to him being chosen as one of Sundance Institute’s 2015 Full Circle Fellows.

He is a member of the Dine, Mandan, Hidatsa and Tsimshian tribes and is based in Albuquerque, New Mexico.