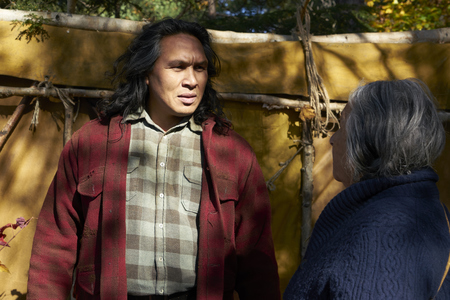 Johnny Issaluk is from the small arctic hamlet Igluligaarjuk (also known as Chesterfield Inlet), on the coast of Hudson’s Bay in Nunavut. He grew up traditionally, out on the land, hunting, fishing and camping with his elders, as Inuit have for centuries. Traditional life was juxtaposed with conventional education through Residential Secondary School and Nunavut Arctic College in tourism, guiding and environmental technology.

Among those many interests Johnny is a keen volunteer and youth mentor, teaching arctic games and traditional activities at a local daycare and coaching arctic sports at a local gym are regular appointments for him. One of the youth projects closest to Johnny’s heart is the internationally renowned educational program “Students on Ice” where he has worked with youth from all over the world as an arctic ambassador and spokesman for arctic stewardship.

Kajutaijuq, is a short film that is part of Inuit legend and part thriller.  A hunter attempts to survive in the Arctic wilderness by following teachings passed on to him by his late grandfather.  It premiered at the Tiff 2014 and is Johnny’s first dramatic acting role.

As an athlete Johnny has been practicing, competing, performing, coaching and teaching Inuit Games for more than 20 years. Johnny’s athletic career has yielded more than 200 medal finishes in regional and national competitions. Recently, he competed at the first ever Beringia Arctic Games, in Chukotka, Russia where he was awarded three gold medals.  He is one of the most successful Inuit Games athletes of his generation. Johnny is a recipient of the Diamond Jubilee Medal, and one of the first sixty Canadians to receive the honour. Johnny was recognized for his ongoing contribution to the health and wellbeing of Nunavummiut. Johnny has five children, and lives with his wife a son and a dog in Iqaluit, Nunavut. Currently in Stratford theatre for the summer playing in a play called Breathing Hole.